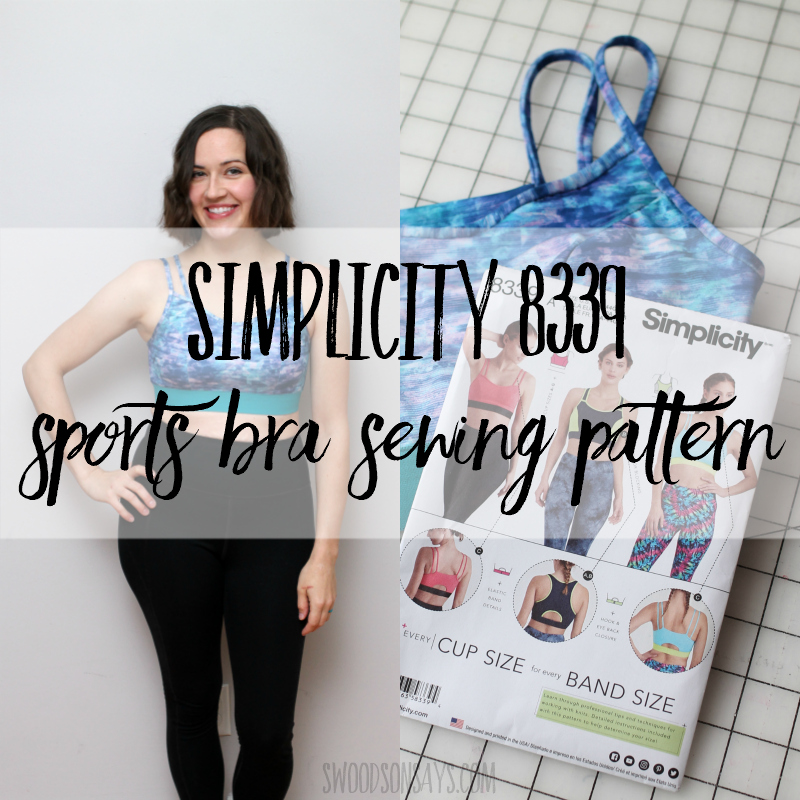 I knocked off two long-term sewing goals in one; presenting the Simplicity 8339 sports bra sewing pattern. I’d been hoping to sew a bra and sew successfully with a paper pattern this year and this project ticked both boxes! The last time I attempted a traditional paper pattern was 6 years ago and it was an abject failure, but I feel good calling this an official success. There are a few things I wish I’d known before I started so I’m sharing a few tips below and why it was important to me to sew this now instead of later. This post was sponsored by JOANN, which means they supplied The Nutcracker fabric panel, supplies, and compensated me for my time, but all opinions are my own. 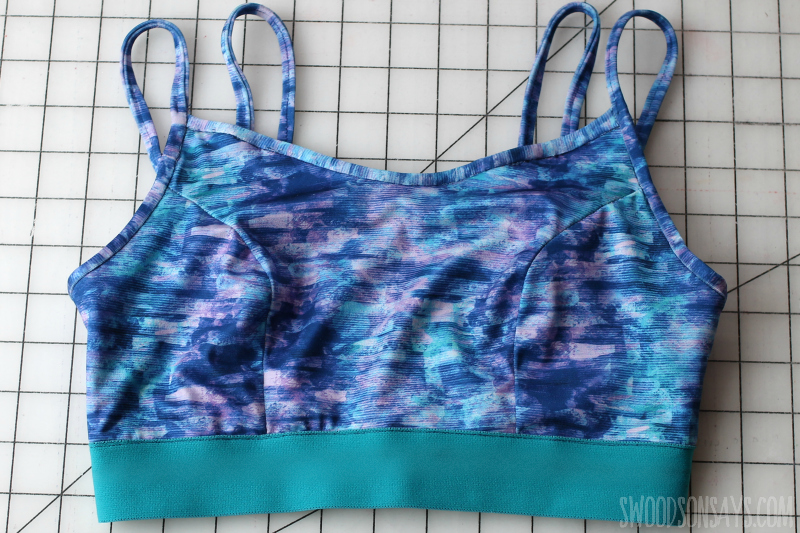 I sewed the ‘C’ view from the pattern, which had strappy details and didn’t require any extra hardware. 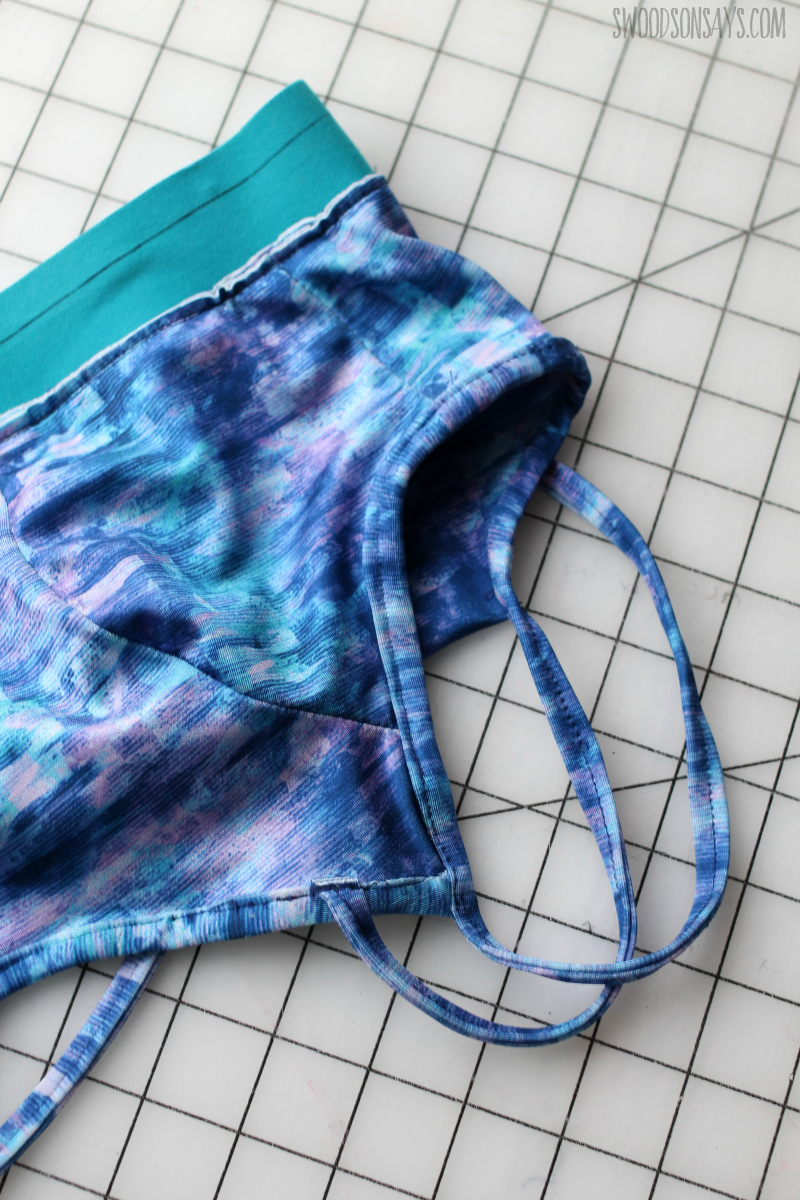 First, some details about the pattern. I measured with Under bust: 29.5″/ Full Bust: 35.5″ which put me in 30″ DD, which sounded bananas but fit decently. The only sizing tweak I made was putting the bottom elastic an extra 1/4″ higher than it called for, for any future bras I would add another 1/2″ to the elastic length as well. The only construction tweaks I would want to consider are how to prevent raw edges on the inside; you can see above how they looked. I’d also like to add a slot to insert removable pads, which would be easy with the lining. 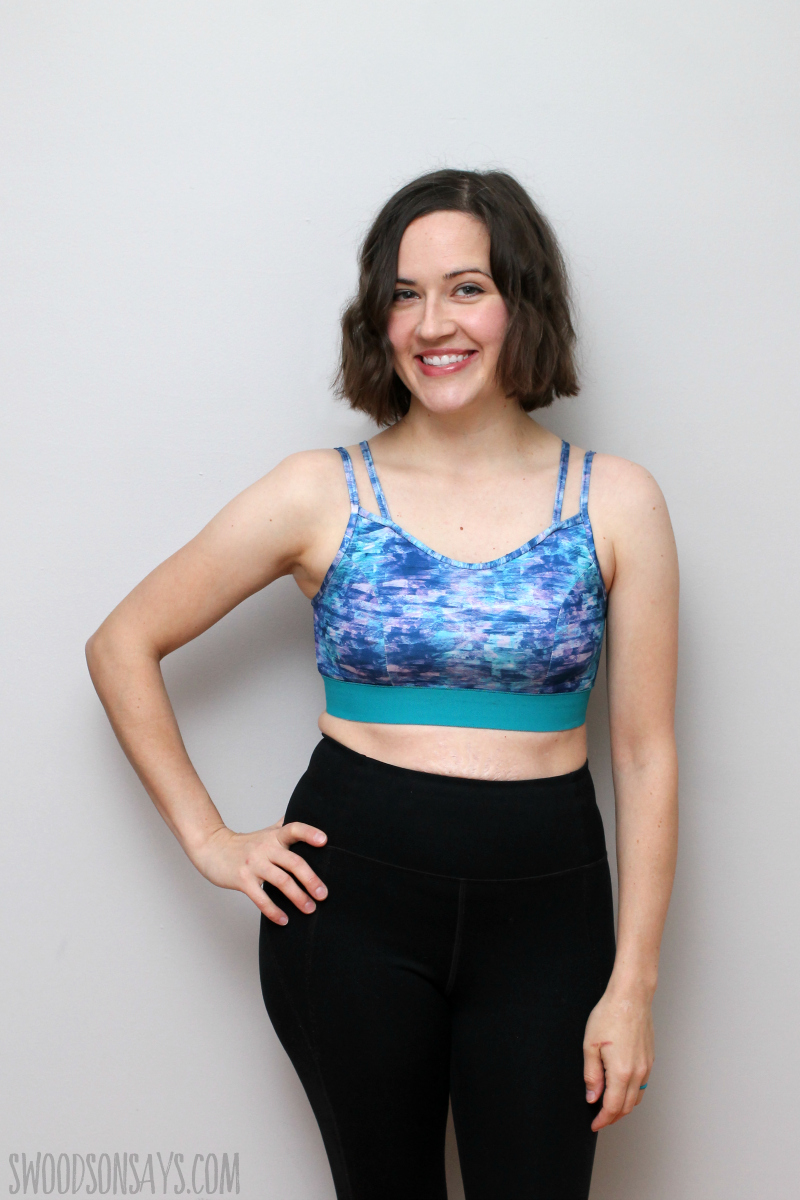 A front view! I have a really short torso so pairing this with my high rise leggings turned into an almost scuba suit. 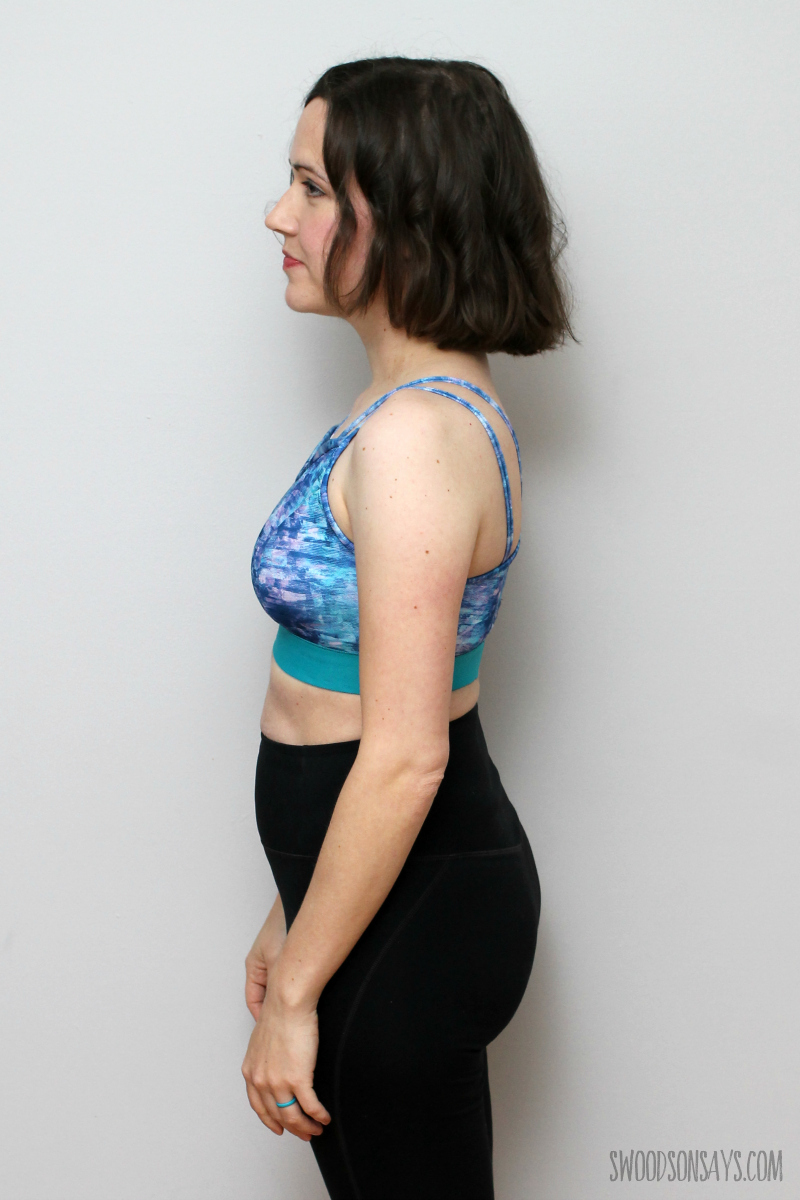 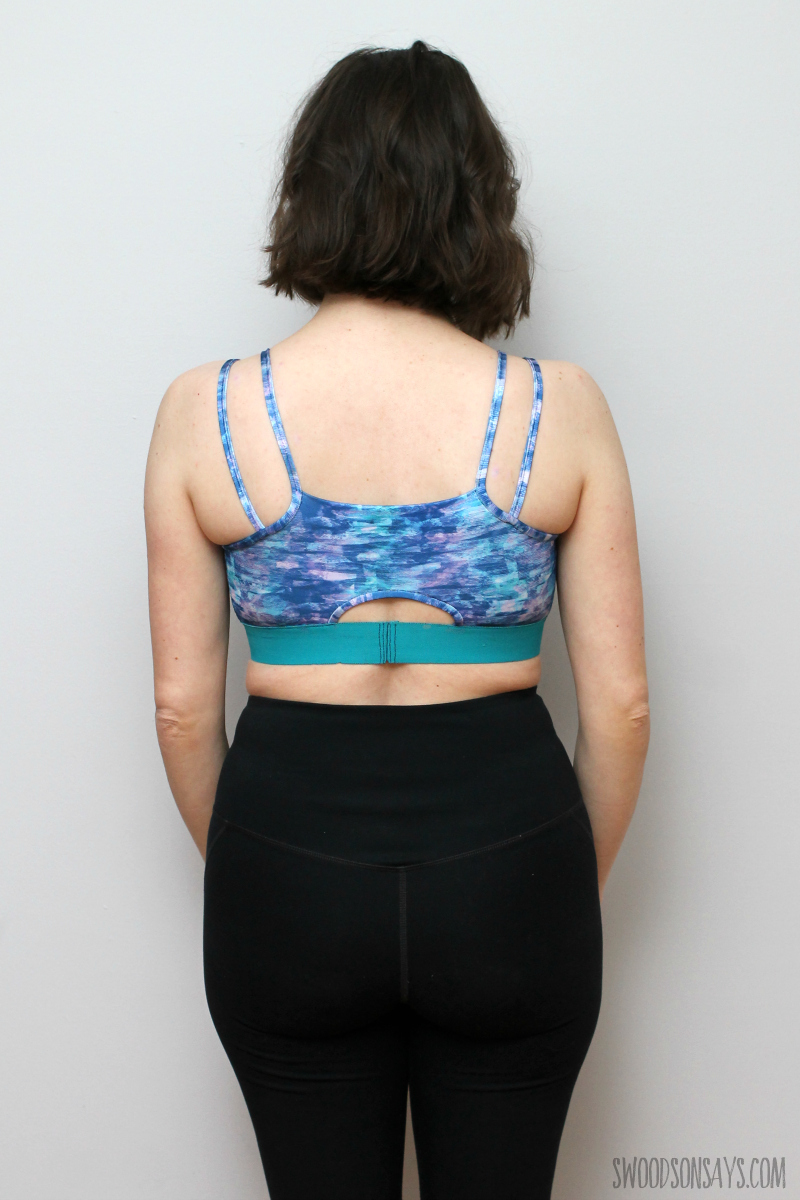 And from the back. The straps look a little uneven here but I measured them out, so it’s an adjustment issue. Again, you can see that the band is a touch too tight but not uncomfortably so. I wish I’d used a matching thread to topstitch the elastic’s edges down, for some reason it is much more glaring than when I used it to topstitch the elastic on towards the top! 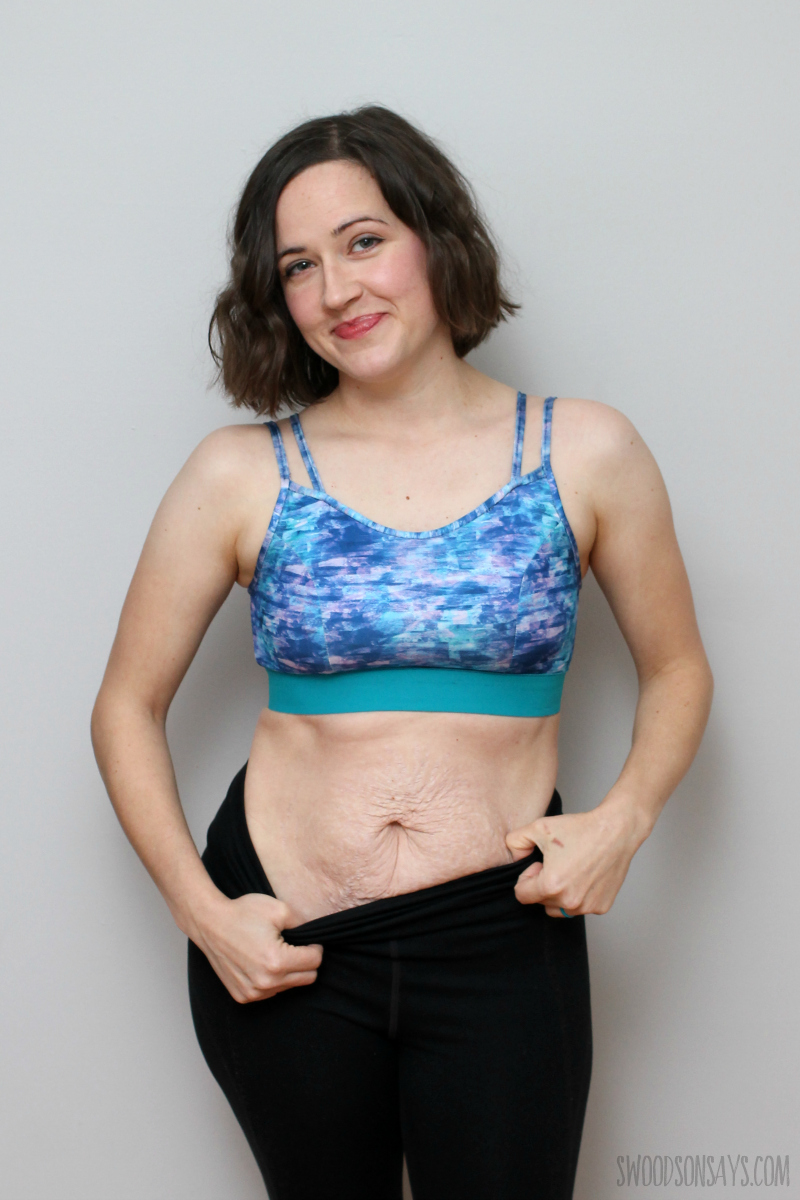 I’ve posted in the past about how the act of sewing clothes intertwines with body positivity for me but I thought I’d share another stretchmarked shot 4 years later and reiterate why it’s important to me to sew things I can wear! A serious back break in college, a wrenched shoulder in high school, and the aftermath of two kids have left my entire torso, from spine to bellybutton, completely twisted and asymmetrical. Even before all the trauma(s), my proportions weren’t typical with an extra short torso, too long arms. It’s very easy to shop off the rack and quickly feel like my body is a problem! Being able to sew from scratch and/or alter clothes just makes it another piece of the puzzle.

After recently falling down an article rabbit hole about instagram & plastic surgery, I clicked through to one of the practice’s account and one of the first photos I saw was a ‘before and after’ with a before that could’ve been my twin. I don’t begrudge or judge anyone who pursues cosmetic surgery, but it is a little unsettling to be reminded that folks are willing to spend thousands of dollars and endure major surgery so they don’t look like you.

Poking around on a few other hashtags on instagram reminded me how much of the imagery we see with stretchmarks is almost always how to get rid of them, so it spurred me to put my stomach in all its twisty, scarred glory back up for public eyes, along with the new handmade bra that fits my wonky shoulder and ribs! Consider this your reminder to sew for & celebrate the body you have right now, instead of using it as a reward to gain muscle, lose weight, or whatever other change you’re hoping to make. 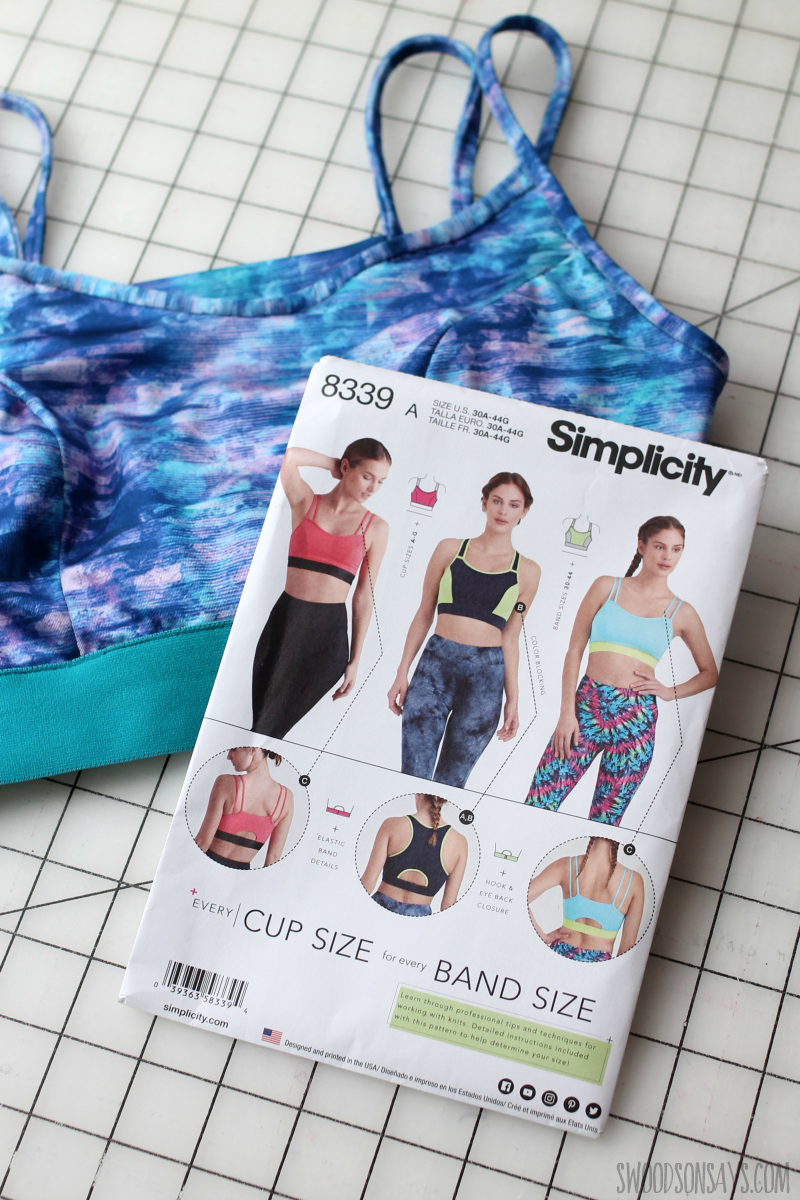 Back to the bra! In addition to the Simplicity 8339 sports bra sewing pattern, I used: 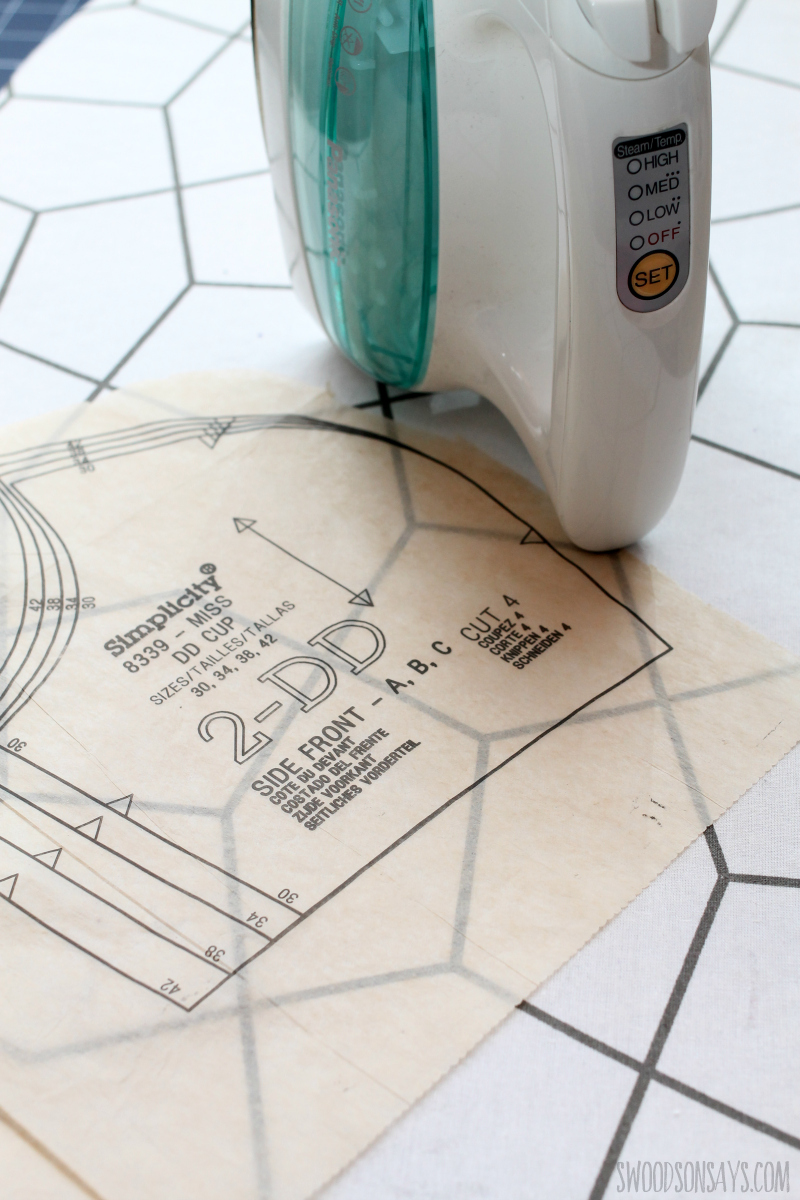 I’m ready for more paper patterns! I was pleasantly surprised with how this fit together and not having to tape anything. If you haven’t tried a paper pattern before, be sure to read all the instructions before you start and figure out what all the transfer markings mean. Also, iron your tissue paper and trace if you want to be on the safe side, instead of cutting straight into the tissue like me! 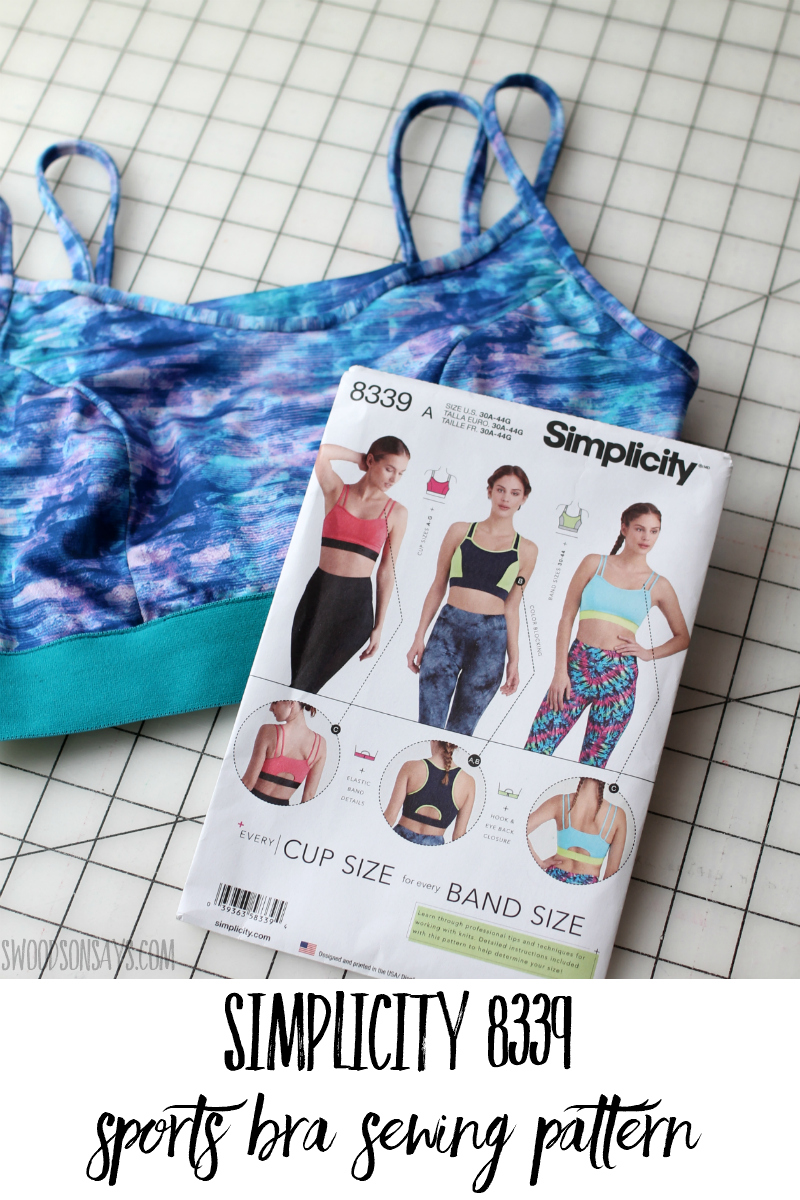 That looks pretty and comfortable. I'm surprised this pattern (and the other similar one, 8569) hasn't been more popular. This kind of non-wire sports bra / medium support top often comes in the unhelpful "small, medium, large" size range in RTW. I have bought a few anyway, but if I get a band that fits, the bust coverage isn't enough. Anyway, I have this pattern "in stash" and hope to make it up when I can source activewear fabric (I live in country Australia so not many shopping options in person).

Thanks for reading! I wonder if you could upcycle other activewear, since it has the princess seams and small pieces?

That bra top looks great and yes I can appreciate where you need to make some adjustments. I hope that a lot of others realise that, as you were brave enough to bare your stomach and A symmetric body that we all have faults and no one, absolutely no one should be body shamed. I look back and wonder why I ever worried over my curvy body with a lot of stretchmarks. Lief is too short.

Life is definitely too short :) THanks for reading and taking the time to leave such a kind comment Sue!

I love this post, thank you for sharing! My belly looks almost identical to yours.

Thanks for reading and taking the time to leave a kind comment!!

I like this kind of bra. I will get this pattern. I greatly dislike the selection of bras at a reasonable price. I do not need a lot of support and, as you mention, we are all shaped differently, so it is nice to have a comfy bra. There is no way to measure or compare our bodies to a standard. By the way, you look wonderful.

Thank you Rosemary and I hope this pattern fits you well, happy sewing!

One more thing, you mentioned the strap discrepancy on the back, having measured correctly... You mentioned an "adjustment," and I just wanted to remind you that it could just have been how the bra stretched in that moment, and that it might move back and forth as you move throughout the day. I didn't notice it when looking at the pictures. OK, now I'm done :)