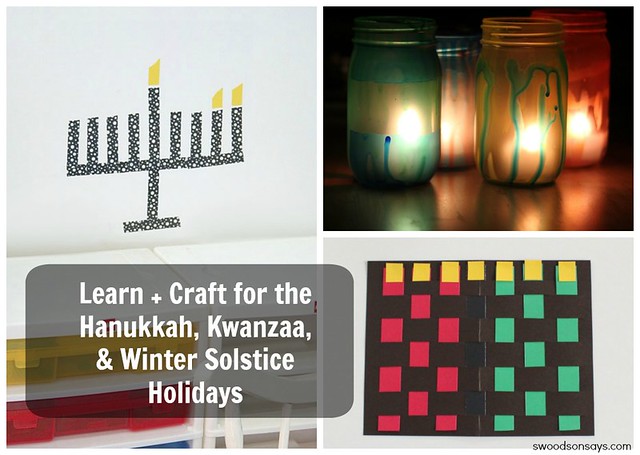 A few weeks before Thanksgiving, my Pinterest feed developed a serious case of red & green. Christmas DIYs are everywhere you look online and I was really taken aback looking at some of Jo-Ann’s holiday inspirations in that they didn’t even include a nod to anything other than Christmas! I wanted to do two things – 1. Learn more about the three other winter holidays I was aware of (Yule, Hanukkah, & Kwanzaa) 2. Pull together some fun crafts that I could do with my son in the future.

It turned into a much bigger project than I entailed! I really enjoyed researching and am embarrassed how little I knew about Yule & Kwanzaa. I am definitely not trying to represent myself as an instant expert on any of these three holidays; if you think I have misrepresented something or left something important out, please tell me! 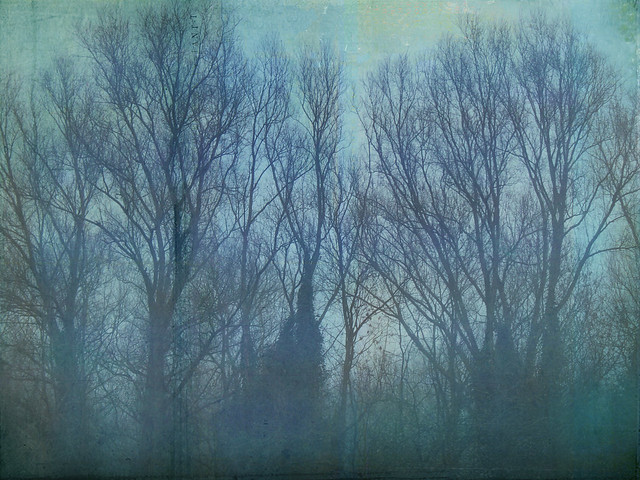 What exactly is Winter Solstice?

Winter solstice is a day in December that marks the longest night and shortest day of the year for the Northern Hemisphere (and vice versa for the Southern Hemisphere). In 2014, it will be on December 21st at 5:03 PM. Yule coincides with the Winter Solstice and is a Pagan holiday with long historic roots that celebrates the coming of lighter days.

As I read about Winter Solstice I was particularly struck by the recurring themes of nature, reflection, silence, and togetherness. They really resonated with me (even though my family is not religious).

The yule log is a decorated log (that has been gifted or cut down, never bought) wrapped in ribbon. Tradition has everyone write down their wish for the new year on a piece of paper and stick it inside the ribbons. I also found this example where everyone wrote on the log itself.The log & wishes are burned while the whole family talks about what they’ve been thankful for this past year and what they’re hoping for in the new year!

Wassailing might be a new word, but the concept will be familiar – going door to door singing (and drinking) to your neighbors’ health. Historically, villagers would be singing to protect the coming year’s crops, so you could throw that in too if you live on a farm. Some secular wassailing song lyrics are shared on this page. 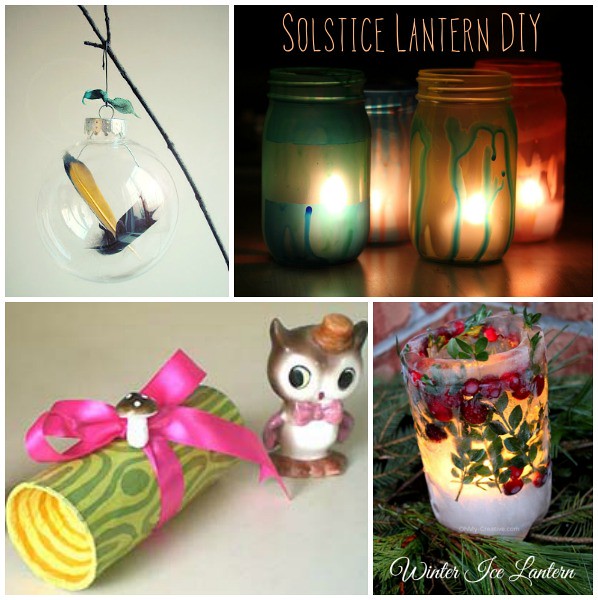 I also love this Winter Solstice / Yule Pinterest board of ideas. 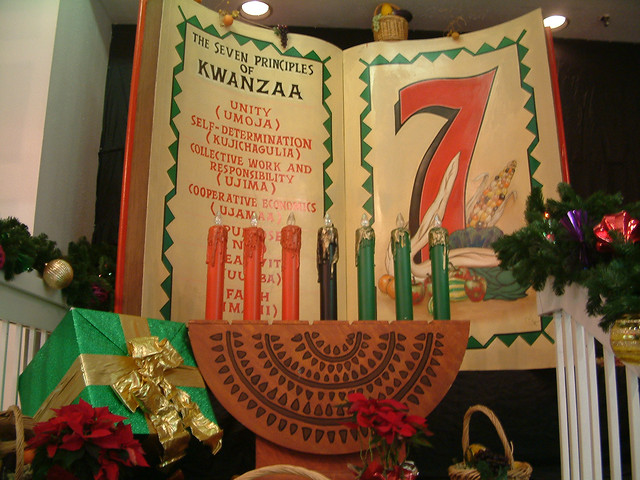 What exactly is Kwanzaa?

Kwanzaa is a holiday that was created in 1966 by Dr. Maulana Karenga, who was looking for a way to bring together African Americans as a community. He drew from the African harvest or ‘first fruit’ celebrations and highlighted seven symbols that represent values and concepts reflective of African culture. It is always celebrated December 26th- January 1st.

Over a week, the family lights one candle and puts it on the candle-holder while discussing one of the seven values and a feast is held on December 31st, called a Karamu. The last day is primarily for reflection as you move into the new year. An ancestral roll call is also common, where everyone stands and tells a story of someone who has been a personal inspiration to them. Making handmade gifts is another tradition, with families making gifts the first day and exchanging during the week. The gifts typically have a cultural component, teaching something about African heritage. 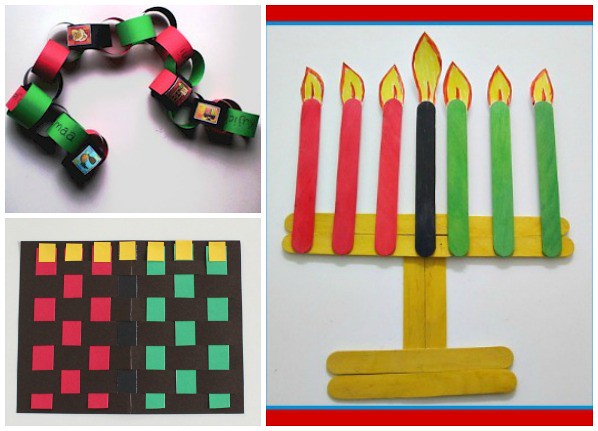 This is a great Kwanzaa Pinterest board of ideas, too! 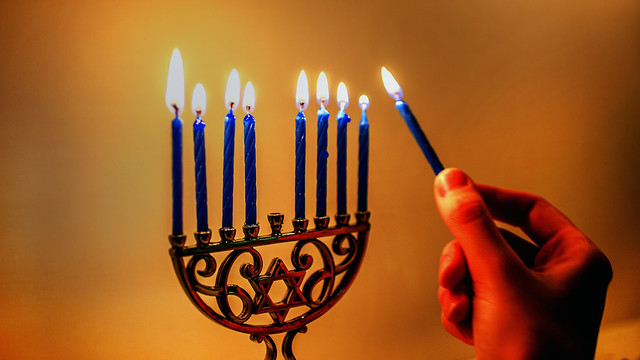 What exactly is Hanukkah?

Hanukkah (also spelled Chanukah) is an eight day holiday, which starts of the 25th day of Kislev (a Jewish calendar month) which coincides with late November-late December on the secular calendar. In 2014, Hanukkah will be from December 16-December 24th. Hanukkah commemorates the re-dedication of Jerusalem’s holy Temple in Jerusalem in 165 B.C.E after the Maccabees successfully won it back.

I grew up (through 6th grade) in a Michigan neighborhood with lots of Jewish friends and was the most familiar with Hanukkah. However, I did not know that its religious significance isn’t that substantial, and that the popularity and commercialization is due in part to its proximity to Christmas. I can understand how Jewish parents wouldn’t want their kids to feel left out of the Christmas craze, so it makes sense.

Traditions:
The lighting of the menorah, an 9-pronged candelabra, represents the oil that the Maccabees burned to cleanse the Temple after regaining control of it. It was only enough to last one day but miraculously lasted 8, which is why Hanukkah lasts for eight days and a new candle is added every night and then lit (the larger candle in the middle acts as the lighter). The significance of oil with the holiday connects it to eating fried foods as a tradition, including latkes (fried potato pancakes) & sufganiyahs (round, jelly-filled doughnuts).

Spinning the dreidel, a four-sided top, is a traditional game with simple rules and historical roots. Jewish people who wanted to study the Torah, which was illegal when the religion was being persecuted, used the dreidel game as a gambling cover for the learning and teaching. Play an online dreidel game here! Gelt is a traditional Hanukkah gift, which is often represented in modern times as gold-wrapped chocolate coins. ‘Gelt’ is the Yiddish word for money. 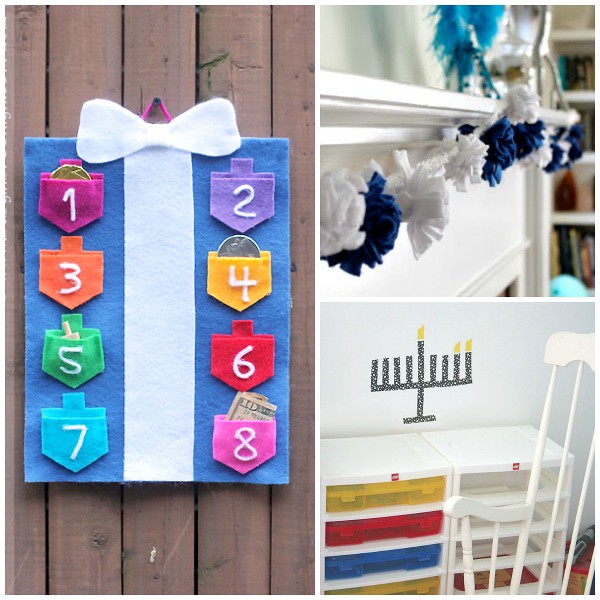 Sorry, I know this is an old page, but all the linkies are broken! (like the links within your sentences, where a word is highlighted. Can't click on any of them) Why is that? I wanted to check some of them out!

I've also just discovered your page in my hunt for embroidery information, and I really like it! :) Your writing style is nice to read.

I think I deleted any broken links and fixed some of the formatting issues of this old post now :) Thanks for the heads up!

Hi Tanya! No matter how old posts are, they should be updated and relevant, ack! I will investigate this right now, and thanks for the kind words :)

You have done loads of research, thank you:)

thanks for reading Vicky!

great work Stephanie. I agree with you that I only know a minimal amount about Hanukkah and really nothing about the Winter Solstice or Kwanzaa. Thanks for doing the research.

Thanks for reading Donna! Glad I wasn't the only one in the dark (no pun intended).

Dena from Chai and Home

Great roundup! Thanks for including the Washi Tape Menorah!

Thanks for reading & commenting Dena!! Hope you're having a Happy Hanukkah :)