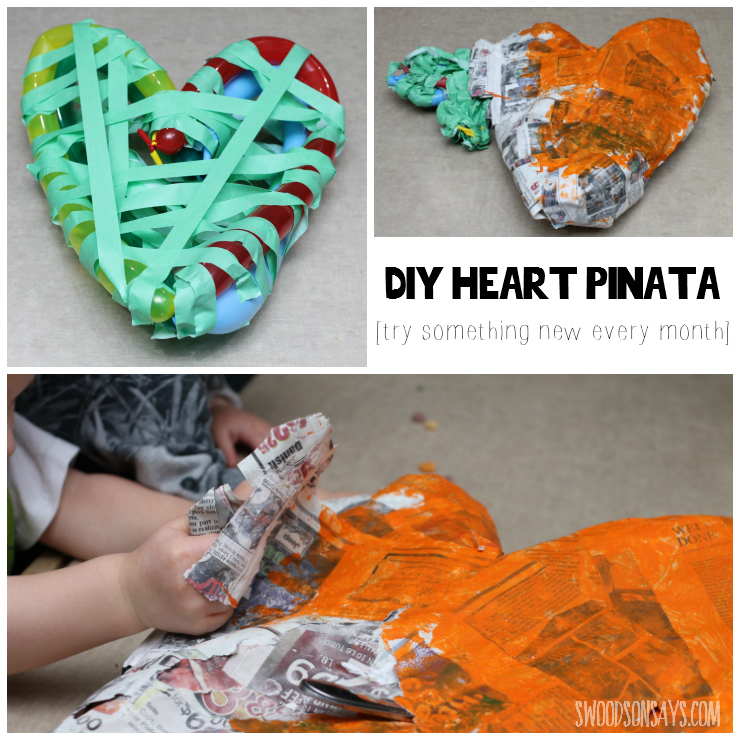 I tried my hand at paper mache! I initially had grand plans to make a heart pinata for my son’s Valentine’s party and quickly realized that 1. I had no idea how to hang a pinata inside and 2.  it was going to take more than one coat, and more than one night. I finished it after the party, let him paint it, and then let him rip it apart.

This was my February trial as a part of the year-long project ‘Try Something New Every Month’! This year, Rebecca from Hugs are Fun is co-hosting and we are making it even easier for you to join in too (no blog required, everyone is welcome). See the introductory post and all the monthly themes here. This month, the theme was “tactile craft” like paper mache, soap making, candles, etc. You can see everyone’s projects (and link up your own) in this post. 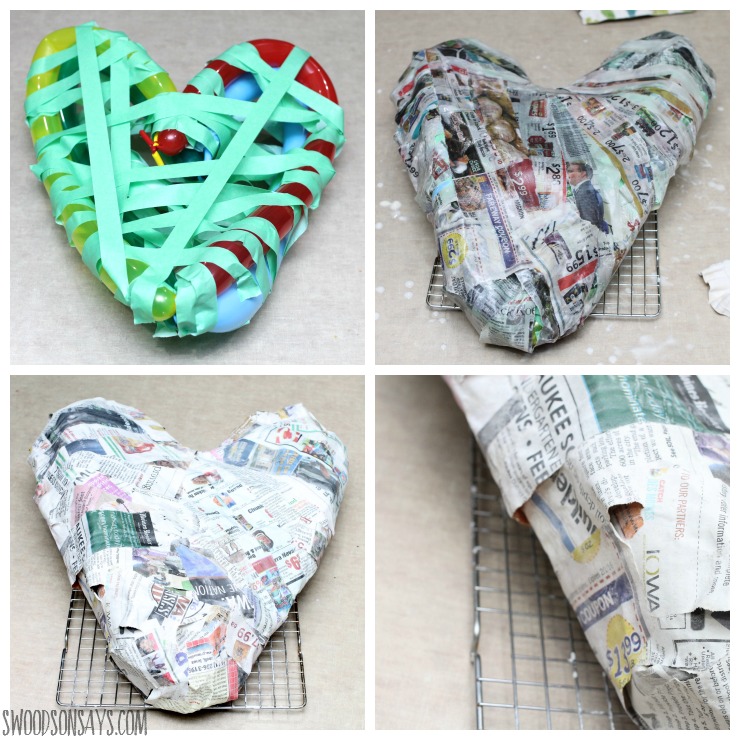 I didn’t find any one tutorial to be particularly enlightening but I browsed quite a few – I used a 50/50 flour & water mixture (not cooked) and newspaper. To build the “base” I (actually my husband, who had to use a pump) blew up four of these long balloons* and tied them together, shaping them with some painter’s tape*. The pictures show one coat while wet, and then the second coat while dry. I then added a third coat; my biggest problem was the edges of the strips leaving gaps/peaks where they ended. Not sure how to troubleshoot that! The “tactile” theme” was loud and clear, sticking my hands in the cold goo and sliding off the excess on each strip felt so weird! 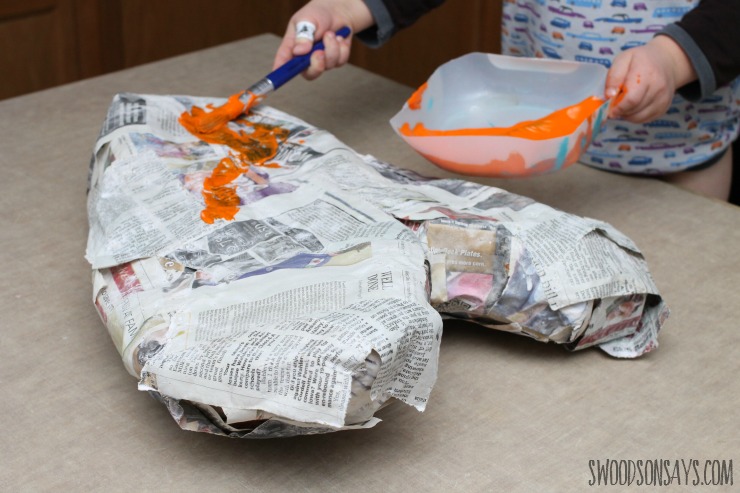 My son really enjoyed getting to paint it! Honestly, he had more fun doing the painting than ripping it open, even though I put candy inside. 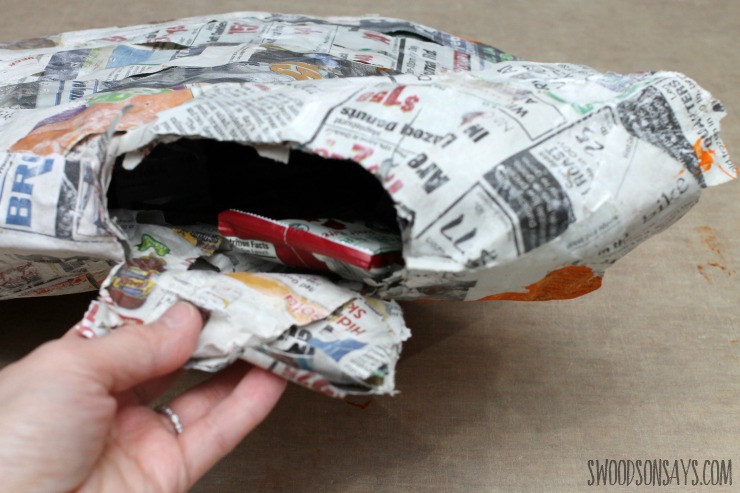 I wasn’t sure what to expect, but sawing an opening to stuff things inside was easier than I anticipated, a steak knife cut through easily and cleanly.  First I popped the balloons and yanked all the tape guts out, then shoved in some candy. I taped the opening back down, but it would’ve been easy to paper mache a light layer over the top. 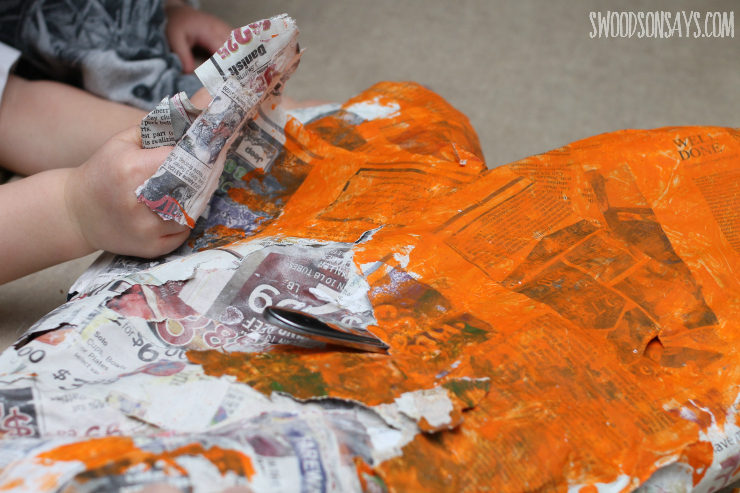 After the paint had dried, I told him that there was candy inside and asked if he could figure out how to get it out! It was fun to see him think about it – his ‘destroy’ instinct is very well developed but it isn’t often that I *ask* him to rip things apart. You can see the butter knife in the middle, but he eventually opted to just use his hands. You can see baby sister in the background – she wasn’t sure what was going on, but she wanted in on it!

I was surprised at how hard I dragged my heels when it came to actually starting this project – even after several months of trying new things I find myself intimidated to start each time. I vaguely remember doing paper mache as a kid and it being easy, but I haven’t seen or heard about it since. I think my technique definitely needs refinement, but I don’t have any big plans for future paper mache projects at this point in time.

Have you done paper mache? Love it? Hate it?

I remember doing really basic paper mache in grade school where we just covered a balloon. Then for Halloween I helped my husband make a sword and shield but that was just covering cardboard with it to make an even layer. I don't think I've ever really attempted anything like a shape.

And I'm the same way about dragging my feet about starting something, I always think it's going to be scarier than it is!

I think it's one of those projects that is either a success or fail - no in between! I love that you tried it! Good job!

I have done it a few times and it's something that often goes right and often doesn't work that well for me. Last month I saw a lampshade made with the technique and I actually started one of my own too but wasn't able to finish yet... I want to though... one of these days. I also want to make a piñata for my kids birthday party this year, I want to do Olaf from frozen. I already saw some tutorials and it looks easy... I hope so.

Let me know how it goes! Hopefully better than mine :D