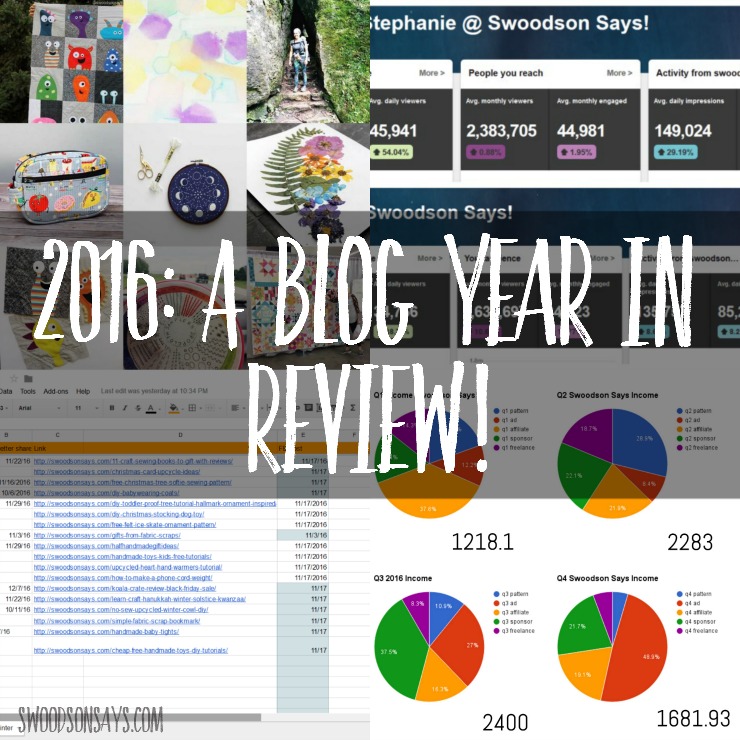 It is 2017!! Which means it’s time to look back at the year and reflect before I forge ahead with 2017 plans and goals. I always share quarterly reports, if you’d rather look chunk by chunk, here is 2016 q4, 2016 q3, 2016 q2, 2016 q1 (and so on and so forth, linked here). I used Jetpack statistics – I know purists prefer Google Analytics but I’ve never had a significant discrepancy between the two and use Jetpack because it’s super easy. 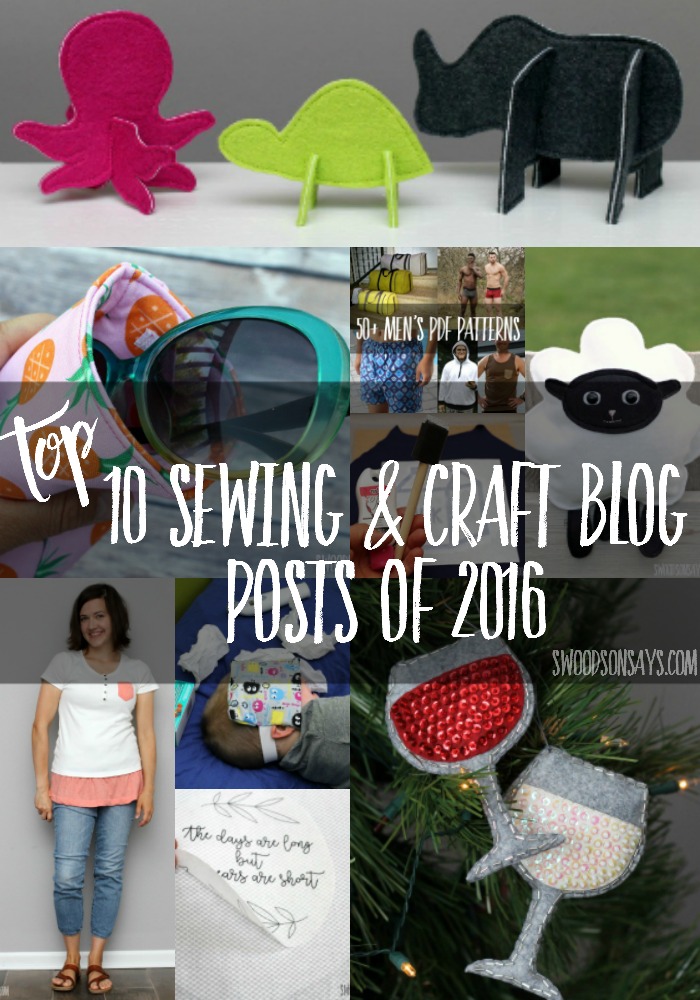 These were the most popular posts that were published in 2016! I put a star by the ones that were promoted – I write sponsored posts through Social Fabric and the companies can choose to pay and boost them on Facebook and/or Pinterest. It usually results in a huge spike, and definitely pushed those posts to the top of the heap – I definitely don’t think #5 would have been that popular without it. 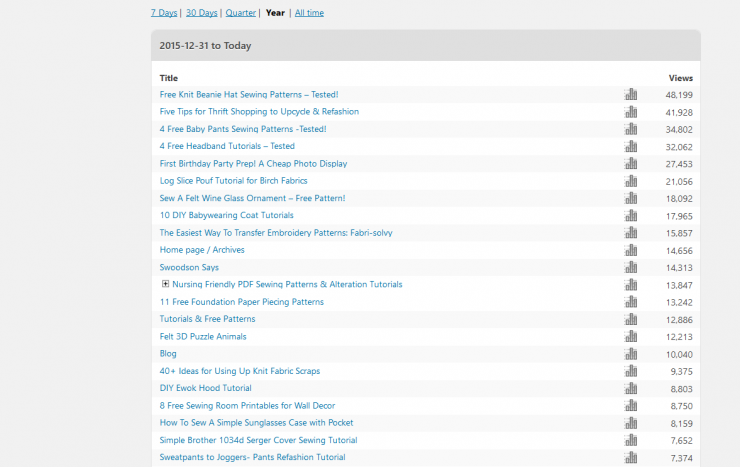 Above you can see traffic numbers for all posts published – it is a huge drop from the top to the middle. Once a post gets traction on Pinterest, it really stays popular for a long time, which you can also see in my quarterly reports above.

Looking at overall traffic, comparing  my overall daily views average from 2016 to 2015 showed a 74% growth over the last year. ( for anyone wondering, my accountant husband told me to calculate this by figuring: [(this year divided by last year)-1]. I haven’t calculated this in the past, and don’t have a frame of reference for if that is good or bad, but I think it sounds positive! 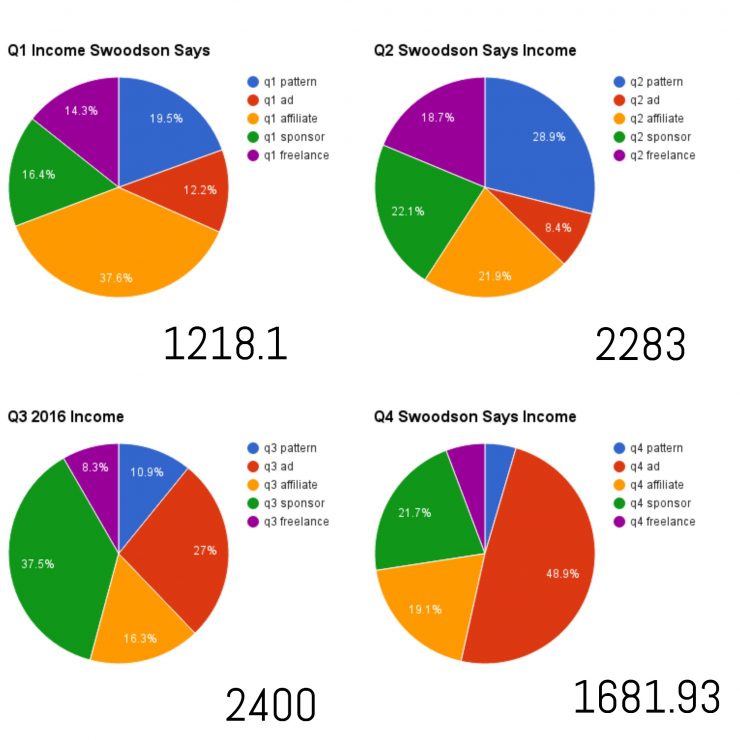 These graphs just show revenue – not subtracting out expenses for profit. I mostly just wanted to share the changing colors of where my money is coming from, as Mediavine ads got settled in and I moved away from freelance writing. I would like to rebalance my graph a bit – but hopefully increasing pattern/product sales and more sponsored posts.

Some noteworthy changes as I looked at some of my data was that the Brother 1034d serger* has been my top affiliate money earner.

I signed up as an Etsy affiliate recently and have seen exciting income from that, but it won’t be reported/received until later this year – if you want to sign up as an affiliate with them, I’d love for you to use my link!

I feel good about this overall, but am definitely making a pointed effort to earn more income in 2017 (more specific goals coming in a separte post soon!) 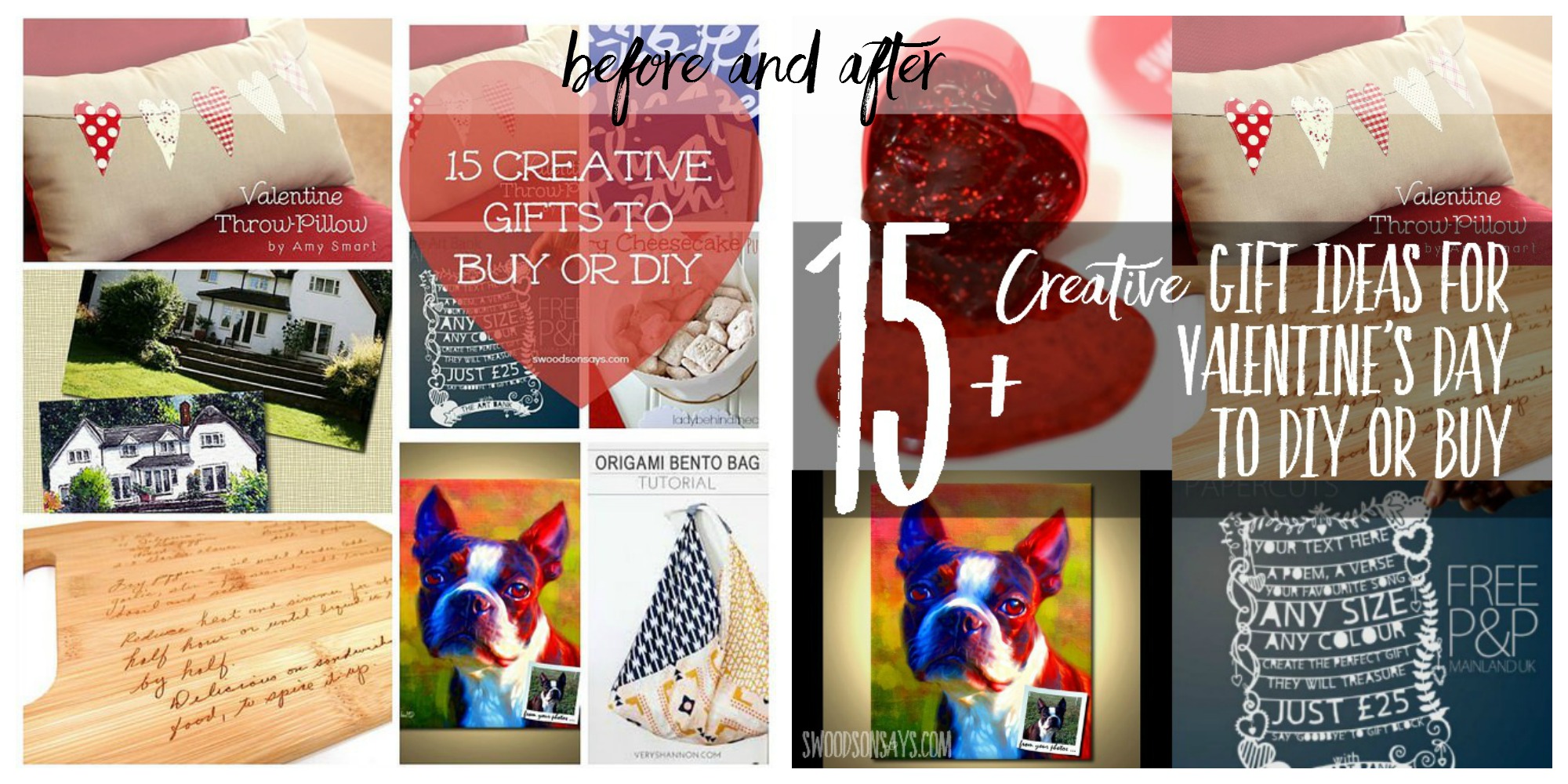 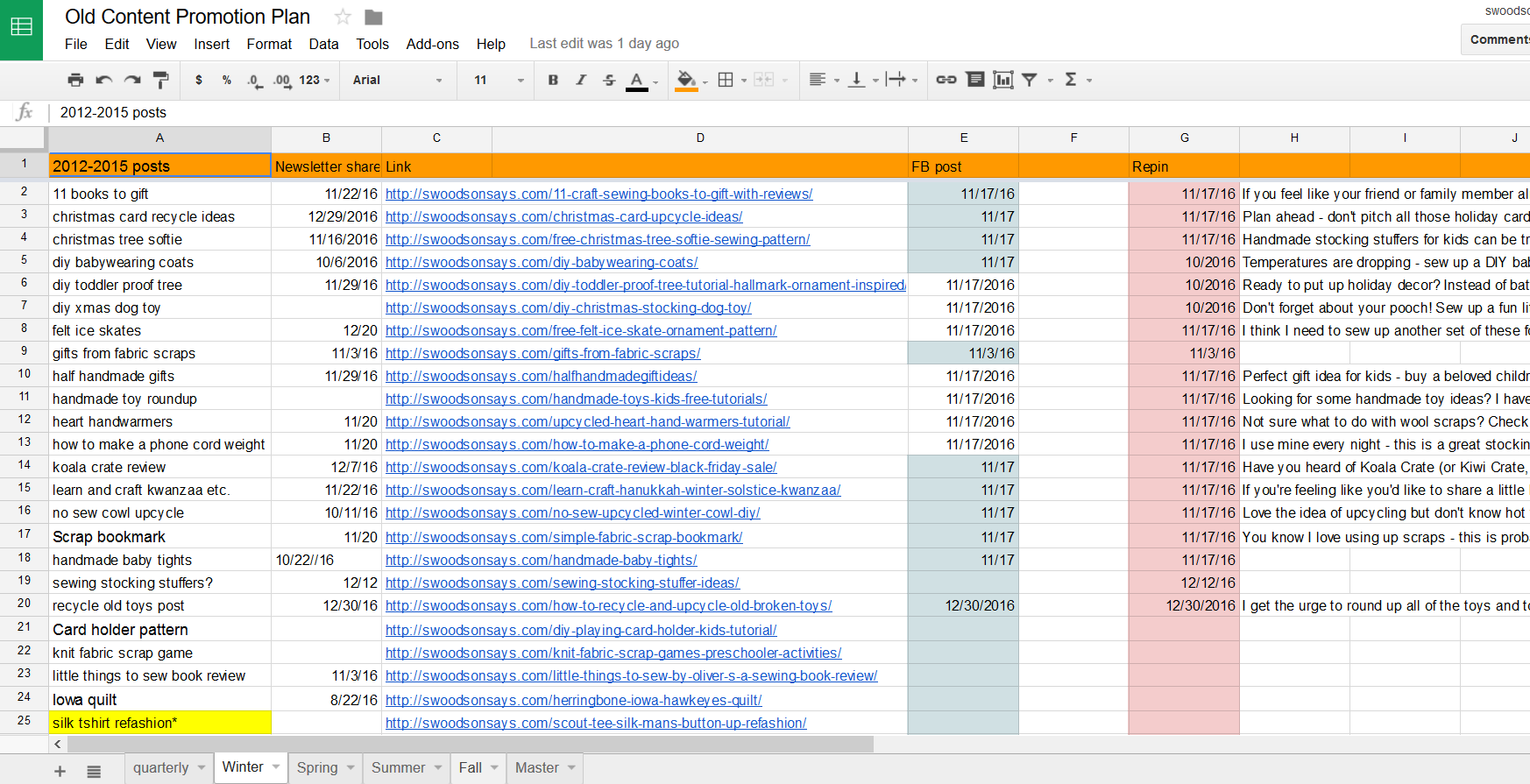 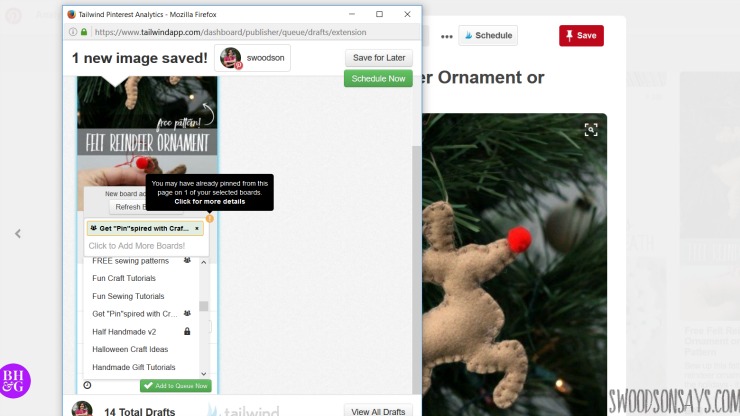 This shows the scheduling feature – I pin something to my “Swoodson Says Board” and then schedule repins of it to relevant group boards and content boards. An awesome feature is that little black box- if I’ve already pinned it somewhere, it reminds me of how long ago that was. If it was a month ago and I forgot? Oops! If it was two years ago? Wow, should’ve pinned it again more recently. Awesome. 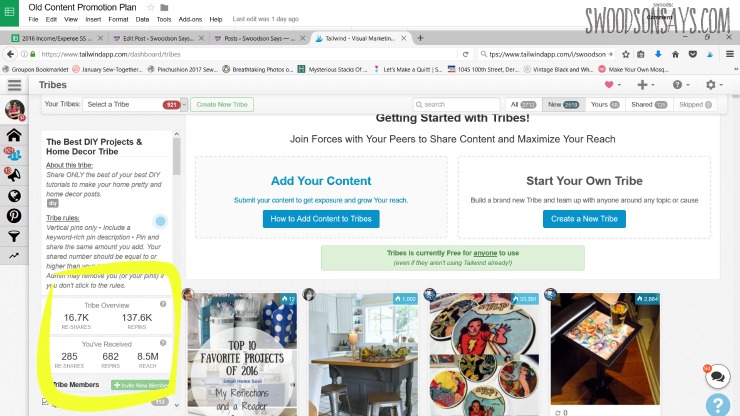 This is a shot of tribes – I can just click someone else’s pin and schedule it to my board right from there. You can see in the yellow box my own stats – when I schedule my pins above you can also “add to tribes”. On this tribe alone, my content has had a reach of over 8.5 million pinners, with all those reshares and repins. Wowza. 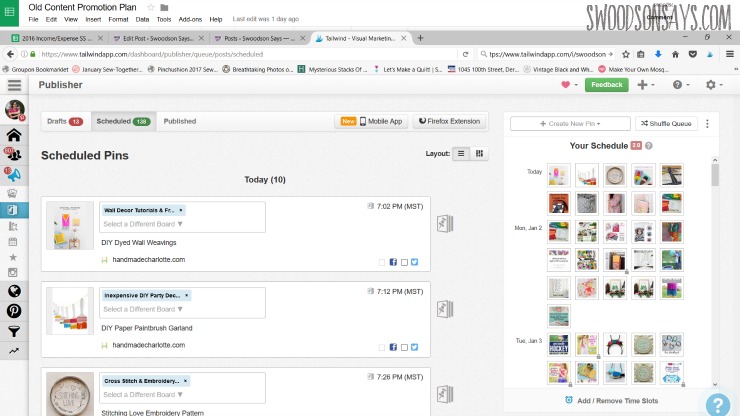 Above you can see the scheduled pins- they analyze your followers and pick “best times” to send out pins. You can add more or fewer throughout the day if you’d like, randomize them, hit an interval so your new pin feeds out over time instead of in one chunk. It’s swell. Right now I have over 300 pins scheduled, going out around 16 a day. 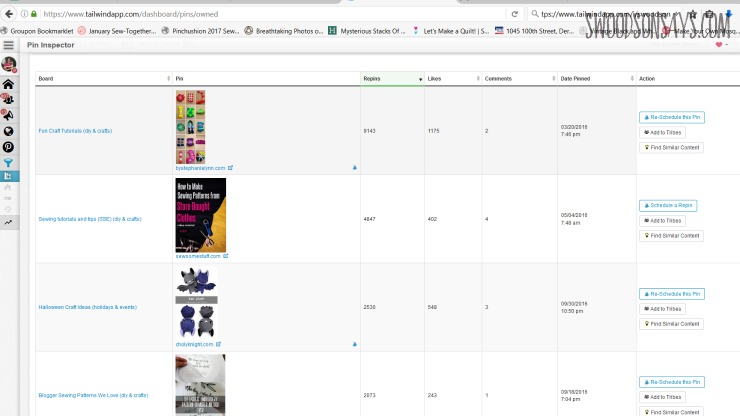 Last but not least, the Pin Inspector shows me what pins have been most popular, I can search for my own pins and schedule repins through here, etc.

I know there are other features and new features coming up, but these are the ones I use the most and I love it! 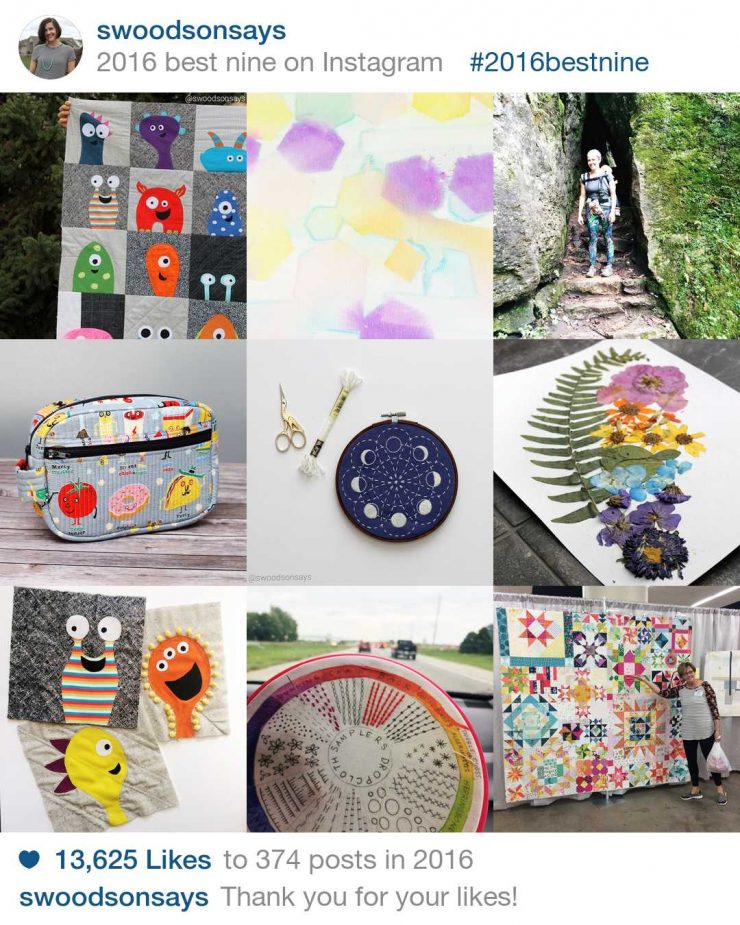 A shot of the most popular posts on Instagram, above!

I do not do much on Twitter or G+, so those continue to be my slowest growth, which is fine. Would love to see bigger jumps for my newsletter & Pinterest for the new year! 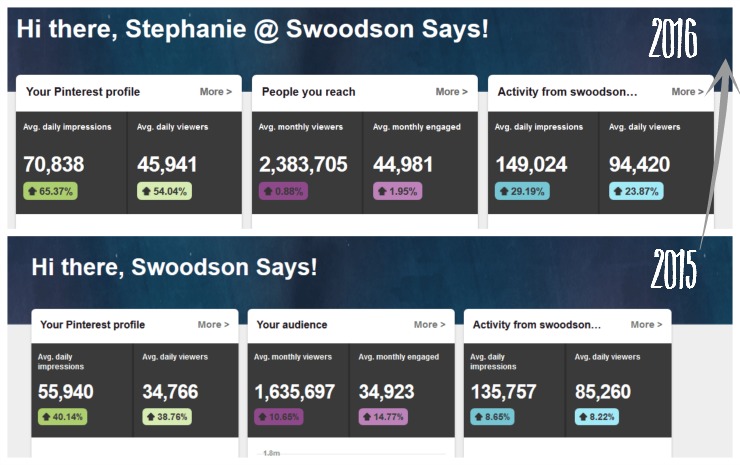 I should have flipped these graphs I think, but you can see from top to bottom some general growth analytics on Pinterest. 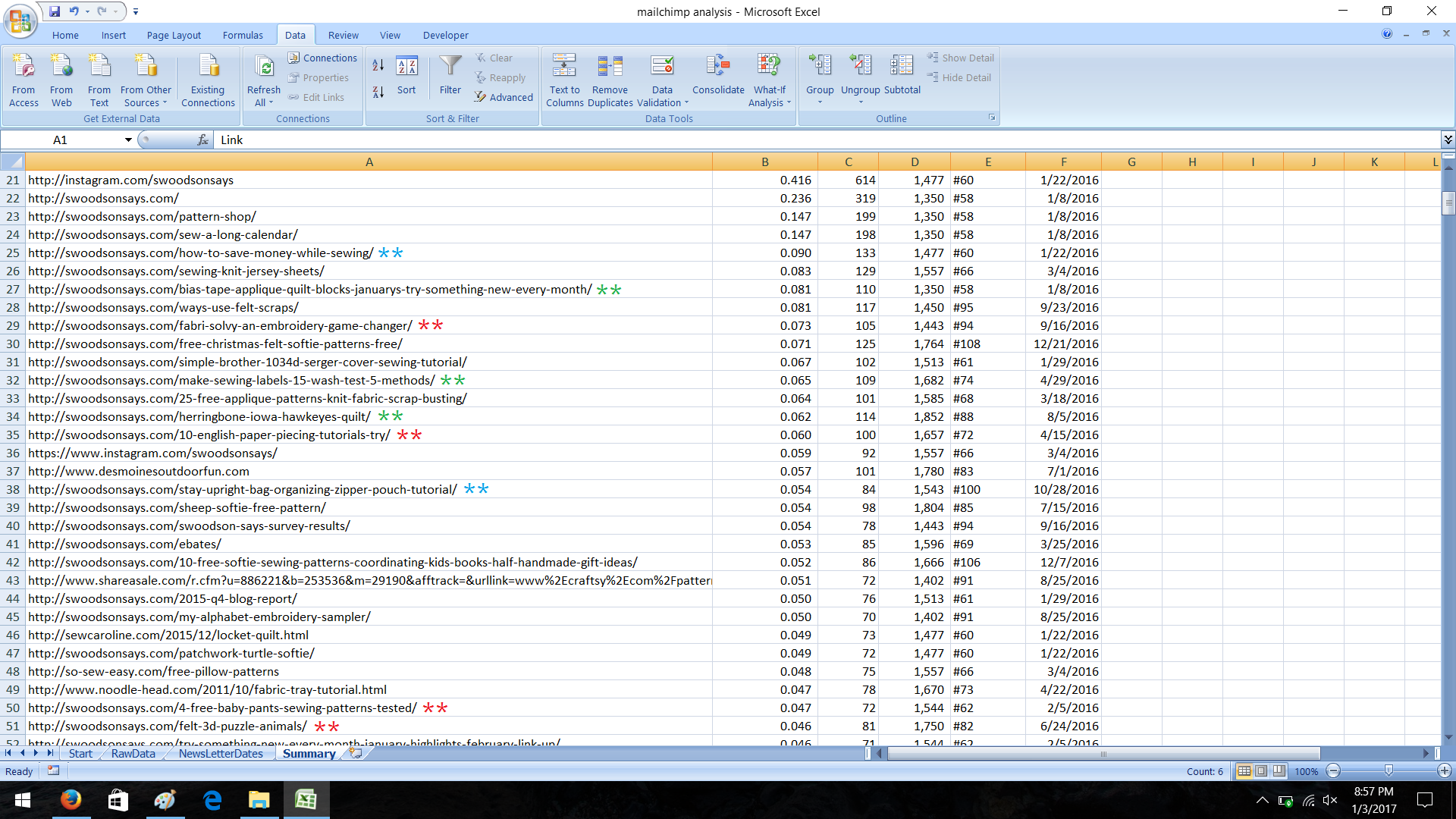 So, I love mailchimp! However, they don’t have any function to allow you to compare clicks across newsletters sent. Every newsletter, I send links to my recent posts and some from the past, along with creative news from around the web, things I’ve had my shopping eye on, and other bloggers’ tutorials I’ve loved. What I really wanted to know was how popular links were with my readers, across all newsletters sent, but also accounting for how many readers I had at the time that newsletter was sent out. My husband works in the financial sector, and is an Excel wizard, and made something called a macro that magically figured all that out!

I didn’t include a screenshot of my least popular links, because the distribution towards the end wasn’t particularly noteworthy (like, lots of links only had 5 or fewer clicks). The only trend I could see was that my sew-along calendar additions regularly do not get many clicks. I have thought about scrapping it all together, when I started it I sewed a lot more for me and honestly rarely have time join in anymore, but it doesn’t take a ton of time these days. On the fence about its future – this report confirmed what I suspected in that it just isn’t that popular.

Last year I organized things a little differently and set up a reflection and goals post for creative thoughts and then for business thoughts.

WOW. What a novel. With all that being said, I’d love to hear both what you enjoyed here at Swoodson Says for 2016 and also what you’d like to see in 2017! I’ll be sharing some specific 2017 goals tomorrow in a separate post, too!

You had an amazing year. I'm looking forward to this year and have been working really hard to get to where you are. So happy for you!

You are so kind Pam!!

Thank you for sharing all the details of your blogging journey. I have fallen off the blogging wagon and in need to get myself back up. I even lost my .com website so, now am in plan to create another .com and new hosting - just need a good content ready to post before doing so to justify my spending towards building the blog...thank you for the motivation!!

Happy to help! Hope you find your enthusiasm again soon :)

My goodness what an extremely valuable post! I wish I did something like this. You are a great example. I really do need to sum up my year of 2016, 2015, etc... and then set concrete goals for 2017. I just feel like I'm scrambling to get everything started in 2017 that I'm not stepping back to evaluate 2016 with hard core stats. It would be fun to analyze the growth each year. The information that you provided was really valuable. Thank you! I subscribed to your newsletter and looking forward to following you. Thanks Stephanie

Thanks Deanna, I so appreciate you saying all of that! I took time "off" around Christmas/New Year's and it gave me a nice quiet time to look back at the year before planning for this one. Definitely doing it again this year!

Congrats on a great year! I'm so impressed by your work ethic and the quality of your content just keeps going up. Here's to a fantastic 2017!

Looks like your hard work is paying off! I've been working on Tailwind while I have the free trial, but I'm still not sure it's worth doing unless I have a lot of group boards. It's takes me a long time to schedule and I find it easier to pin things when I see them. I'll have to check out that All Free Sewing board...

Also, you posted to IG more than 2x as often as I did. I'm curious if it brought you more traffic. I'd say our follower growth was pretty similar this year, so I'm wondering if frequency matters....

Hey Sara! Have you tried the tribes feature at all? I know your pins are much more curated than mine, but I bet you can find some large enough with a fair amount of the aesthetic you're going for. I would say that IG brings me very, very little traffic. I searched my incoming links and literally found zero, which seems implausible, but maybe it's valid. I do know it has made me several connections that would not have happened otherwise. When I first set out to try and post a photo every single day, I think frequency mattered a lot more because it was chronological. Now that they've changed it to be more like Facebook, I think it is the opposite, and I'll actually be trying to post well lit/composed photos, which will definitely mean way less frequently. We'll see how that goes!